Reflections on Good Friday During a Pandemic... 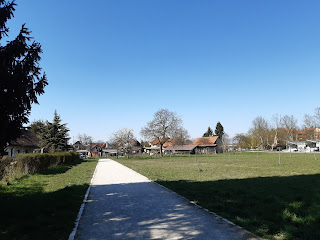 We're all living in a strange time, a time that we could never have imagined even two months ago. When tragedy comes, and this is a tragedy, it is important to stop, think and reflect. This period has given some people more free time, more time to spend catching up with family and loved ones, time to do those little things they never were able to do before. For others, this time is frantic, scary and full of stress. For those of you who are key workers, I join with many others to say thank you for the hard work you are doing at this time.
Despite the busyness and stress many may be facing today, it is still important to stop and think, even if only for a moment, about what today means. Two thousand years ago a group of unremarkable people also had their world turned upside down. They were scared, devastated and just seen their whole world changed. They were so scared that they too locked themselves away to protect them from the the outside world. They had just seen their leader killed and they themselves feared facing death. It sounds very familiar doesn't it?

One can't help but notice that if the disciples had just listened a little bit harder to what Jesus had told them whilst he was still alive, they would have realised that this was not the end of the story and that God was working through the cross to defeat sin and death. If they'd listened to Jesus, they wouldn't have been so afraid of what was to come. I think the same is true for us today but with one major difference - Jesus has already defeated sin and death, we know the end of the story.

This pandemic is making many people think about their own mortality, think about what the world will be like when all is said and done. We can all see the problems in this world and whilst we are seeing a lot of good in people, we are also seeing the bad - the selfishness, the greed, the self interest and the lack of care for others. Good Friday reminds us that this is what Jesus came to deal with. He came to sort out a broken world and broken people.

Trusting God and asking for forgiveness is not a desperate act. It's not about being frightened into doing something no logical person would choose. It's about looking at the world around us, looking at ourselves and acknowledging that this is not right, we are not right and that only God can fix it all.

We may still be concerned about what the future brings and when we will be allowed our freedoms again but if we just stop, think and listen to what Jesus said then we can be reassured that God is still in control and if we trust in him, we have a certain hope and a future waiting for us.
at April 10, 2020