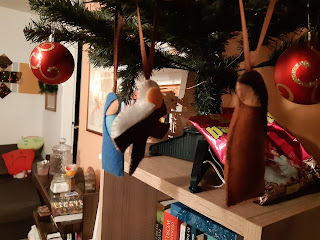 I know I'm fairly late in writing this tonight (if you've even noticed) but I wanted to wait until I came home from the youth group Christmas party which was tonight. I was in charge of organising it all and I think it was fairly successful. Activities ranged from making antlers from balloons and tights to making a trailer for a Christmas film. We also had a talk on why we celebrate Christmas and we ended the evening with a Secret Santa type game. Although it was a lot of work to organise it all, I had great fun doing it and I hope the teenagers also had fun.

The last two weeks have been fairly busy for me in the run up to Christmas. Just after I wrote my last blog we had a Ladies Christmas Craft Evening where we sewed these lovely tree decorations. I also gave my first talk entirely in Slovene. Granted I had to read it from a piece of paper but I still think it's a step in the right direction. We sang carols together and generally had a good time of fellowship. 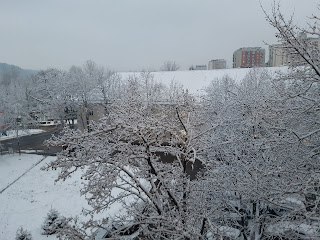 In Ljubljana we've also had our first snow of the season. It came down very heavily for two days but didn't last too long. Strangely enough, two days later it was 15 degrees and the snow pretty much disappeared. It's been too warm since then for any more. I can't say I'm too disappointed. Whilst I like the idea of snow and it all looks very pretty, the reality is that it is cold and wet and get absolutely everywhere when you have to get on with your normal life. Unlike in Britain where a small dusting means that schools are closed and the trains all stop working, people here are prepared for winter and just carry on.


Well I'm nearly at the end of my year's work. I just have a few more things to do on Sunday, including meeting up with a French girl who only became a Christian a few weeks ago! After that I'm on holiday and back in the UK for 10 days. I think I'm managing to meet up with most people and all my family. I will be in Swindon for the whole day on 29th December so I'm hoping I'll be able to see many of you then.

This will be my last post of the year so I would like to take the opportunity to thank all of you for your continued support and prayers for me during this time in Slovenia. I hope I will soon be able to announce what my plans are for the next year. In the meantime, please be praying for safe travels and a good and fruitful time when I'm back in England.

Merry Christmas and a Happy New Year everyone!
at December 20, 2019