Settling in for Winter...

The weather is finally starting to turn and autumn is on its way out. I feel that this is a terribly British way to start my blog post this week but I won't apologise because I've learnt that Slovenes talk about the weather quite a lot too. I guess that's one of the reasons I like it here so much, it feels similar to England!

It has been a warm November and so I've been ignoring the fact that it gets much colder here than in the UK. My British housemate keeps telling me that I just need to survive winter in Ljubljana. Apparently it gets dark, depressing and cold. With temperatures set to drop next week to just above 0°C I've finally had to face the fact that I need to be better prepared. With emergency shopping off my list, I've been able to focus more on that fact that Christmas is coming! I've been aided in this by my other housemate who has been watching Christmas films since the beginning of November! 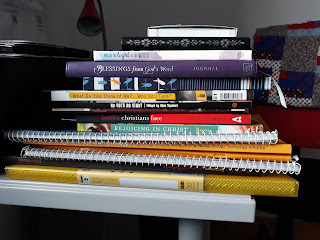 You may think that I'm early in talking about Christmas but the truth is at church we started thinking about it a few weeks ago - what the music will be, what the kids will do etc. I've discovered that working for a church means planning things well in advance! It's the unglamorous side of being a missionary, a lot of my time is spent in planning, admin and organisation. This is my current pile of books and notebooks. They are all in use and they all have a different purpose! (If you can't see, there are 16 on the pile). 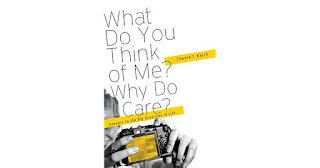 Life here has been continuing much as it has been over the last couple of months. I've been very encouraged by the one to one/ two meetings I've been having. I've been having good discussions and lots of questions with the teenagers and with the other lady in the church I've been meeting with. I've nearly finished the studies on Proverbs and the book Battles Christians Face with the teenagers. It has been good to hear what they think on each of the topics and good for me to be reminded of what God has to say on each of these subjects. My plan now is to alternate between studying a topical book and a book of the Bible. We will therefore move on next to a book called What Do You Think of Me? Why Do I Care? by Edward Welch. I managed to read it in a couple of hours this week and it is a helpful Biblical insight on how we view ourselves, how others view us and most importantly how God views us. I hope it will be a useful topic for the girls I am meeting with. Please be praying for them as they are seeking to live as Christians in a culture where so few others are. 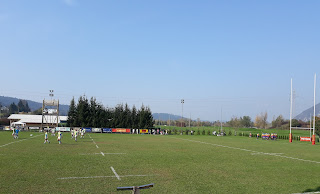 One answer to prayer for me has been that I've been able to start making Non-Christians friends. Until recently everyone I knew either went to my church or were friends with my housemates. Although they have all been very welcoming I wanted to get out of the Christian bubble a bit and make friends of my own. I have somehow found myself in the position of getting to know people who work with the Slovenia and Ljubljana rugby teams. It is not as popular here as in the UK as can be seen in the picture of a game between Slovenia and Andorra. It has, however been a bit surreal for me as I have found myself amongst the players, coaches and officials. Last Saturday was especially interesting as I assisted my friend in filming the match on a camcorder. We had to climb up an unattached ladder (whilst carrying a cup of coffee!) to a wooden platform that had big gaps between the slats! My friend kept forgetting that she was filming and that everything she said would be caught on film. Every so often she would ask me what was going on and so now there is official footage of me trying to explain rugby... Anyway, it's been really good to get to know a new group of people. Please be praying for me as I seek to be a good witness to these people and that God would give me opportunities to speak to them about the gospel.
at November 16, 2018