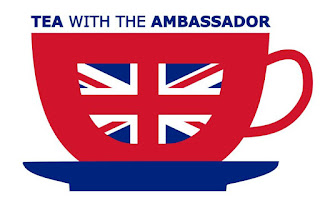 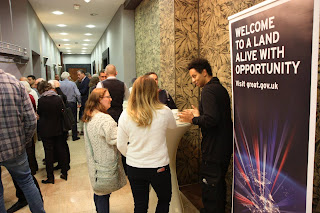 Whatever your political view you can't get away from it, Brexit is coming seemingly faster every day. As a British national in an EU country this is obviously quite an important topic. I've lost count of the times people have asked me what this will mean for me. Slovenes who know anything about it seem to view it with complete confusion. I personally am quite interested in politics and like to be informed about what's going on. I've kept up to date with the latest developments but there are still many big questions. It was in this light that I was

told about a meeting with the British Ambassador which would hopefully shed some light about what it would mean for British people in Slovenia. It was held in a 4 star hotel in the middle of Ljubljana. At the last minute I decided to change out of my hoodie and I'm glad I did! It felt very much like a business meeting for white middle aged, middle classed men! I was there along with my housemate and another friend and we were some of the only women there let alone under the age of 35. There was a cameraman filming the event and because of our demographic I'm sure we ended up being filmed more than most people. I found this photo on the embassy Facebook page, oh and look, we're speaking to probably the only non white person at the event. To be honest it was an almost complete waste of time. The only information we were given were things we could have read (and I had already read about) in the news. We were told that things will stay broadly (!) the same. Apparently the negotiations have been broken into parts and the issue of most importance was that of citizens rights (they kept repeating that). There have been negotiations about all the things to do with actually leaving the EU but nothing to do with the continued relationship between Britain and the EU. This means that any specific questions were met with the stock answer that those things hadn't been negotiated yet. One important thing for me specifically was being told that things will stay the same until the end of the implementation period which is in December 2020. As I will be leaving in the summer of 2020 this means that I don't really have to worry about anything unless I want to come back and hopefully at that point things will have settled down considerably.

As with all meetings of this kind where you give people the opportunity to ask questions there were many that were either pointless (what colour will the passport be?) or not to do with Brexit (The Catholic church won't let me spread my wife's ashes in England!) At least we got given light refreshments at the end. The food was all canapes in little trays. You basically got one mouthful with every little tray. My housemate decided to use this opportunity to provide herself with dinner. She ended up basically following waiters around getting more canapes although she did pretend that she was getting them for other people...

I'm glad I went to the event, at least I know a bit more about what things will be like until I go back to England but I also know that the news is still a pretty good source of the information I need.
at November 30, 2018