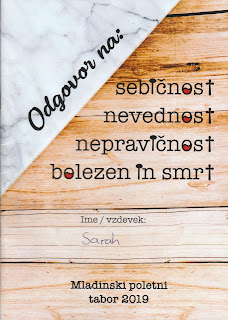 Ok, I know that sounds a bit dramatic but it's reasonably true. Last week we had our youth camp and my first camp of the summer. The theme of the camp was looking at different problems in light of the cross. The picture here is of my booklet which was designed by one of the teenage girls I meet with regularly. I think she is very talented! Anyway the text means, from top to bottom, selfishness, ignorance, unrighteousness, sickness and death. We had a great time together learning about these things but also singing songs, playing games and just hanging out together. We were camping in the same place as last year, on the side of the Kolpa River on the border with Croatia. More than once I had to shout across the river to try and get the kids back from the other side!

Every night we had a bonfire and we enjoyed sitting around it and talking together. One night we had a particularly long discussion on whether true love exists and what is the Biblical definition of love and marriage. It was difficult to follow everything that was going on as it was all in Slovene but it was interesting to see and hear many people get involved in the discussion. 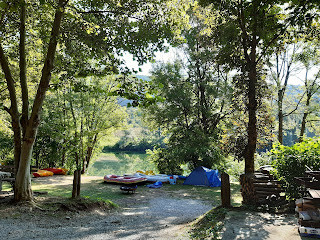 The camp, of course, was almost entirely in Slovene. I was fairly proud of myself because I spoke more Slovene than I ever have before. I've started to get confidence in the fact that I can just about make myself understood and I am able to speak the language. I'm still very grateful that I have English to fall back on when my Slovene runs out. I think I've managed to surprise quite a few people because I'm not sure how many of them have heard me speak much Slovene before now. Anyway, it felt like another step forwards which was a great encouragement to me. 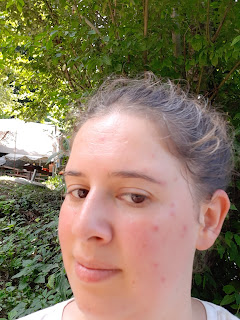 Ok so now I'll tell you about the mosquitoes. Some of you may remember that last year I slept in a tent for two nights but then was in a hammock for the final night. This year I decided it was so much more comfortable in a hammock so I would not even try in a tent. The first night was great but I was slightly on the cold side. As a result I slept with my sleeping bag over my head. I woke up a few times but you expect that when camping. The second night I decided to put on an extra jumper. I was a lot warmer and so didn't have the sleeping bag over my head. This was the result. Actually that was the result after the third night. I was too hot with the bag over my head and so I got bitten even more. In total I counted about 25 bites on my face. When I went to church a few days later, people thought I might have chicken pox/ measles etc. I was very grateful though that none of them hurt or itched, they just looked bad. Fortunately they are mostly gone now.

This week has also been quite busy. I've had some friends from the UK staying with me since Tuesday and they left very early this morning. Added to that, some other friends from the UK messaged me Tuesday morning saying they were travelling through Ljubljana that afternoon, was I free. I was able to meet with them, say goodbye and welcome my next visitors. It also looks likely that another family I know from the UK will be visiting my church on Sunday. It's been very unexpected having so many people through but it's been really enjoyable and enforced rest for me. I think I would have been very tempted to work too much this week rather than recovering. Next week, though, is back to the grindstone as I prepare from the church family camp. Prayers and visitors are always gratefully received!
at August 02, 2019