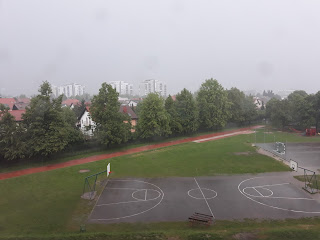 Finally I'm here! I've landed in Ljubljana and I seem to have brought the English rain with me!

This was the view from my bedroom window earlier today, there are mountains behind there somewhere!

I was picked up from the airport yesterday by Peter Novak, the pastor of the church I am working for, and he took me over to his house for some tea and to say hello to his family. It was great to catch up with them all again. After that I was taken to my new flat. I am temporarily in a spare bedroom but will move in a few days into a bigger room.

The people I've met here so far have been lovely and very welcoming. I've been taken to the police station and I've been grocery shopping and I've managed to get a Slovene phone number. All in all I feel I've been quite productive! My room currently looks like a bomb site as I've started (and given up) trying to put my belongings in some kind of order. In all the excitement of moving, I did manage to forget one vital piece of equipment - my laptop charger! I'm doing this blog now, earlier than I thought, so that I've given you all an update if I run out of battery! Later we're going to see if we can replace it, if not it'll be posted on from England! I can't believe that out of all of the things I might have left behind, I managed to leave something so important! Please be praying that I can get it sorted soon.

All is not lost though, I have a tablet and now plural phones so I'm still contactable and I'm still able to do most things.

The big question now is what will I be doing? To be honest I'm still not sure on the details yet. Peter dropped me off yesterday and said "See you Sunday." I think I'm being given space to settle in and get used to the country etc. It is nice to have the time to get used to my surroundings and it has been very helpful living with people who know what they're doing in terms of life organisation.


So the plan for the next couple of days, unless I'm told otherwise, is to get to know some Christians from the area. Tonight there is a birthday/ leaving party being held in my flat. This will be a good opportunity to get to know people my age. Tomorrow I'll be going on a walk around part of Ljubljana. I would have liked to have able to get out and wander around the local area just to get my bearings but that will have to wait until the weather clears up.

Sunday is obviously church and this will be I guess my first official time going there. I'm really looking forward to getting to know people and being able to build relationships with them. Slovenia is a very relational country and so if my time is best spent served chatting over coffee, who am I to complain? Now if only this rain would go back to England...
at May 04, 2018