Finally Back in Slovenia 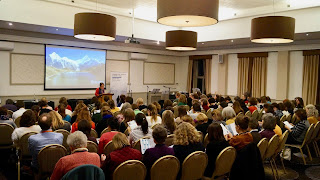 I can't believe we're already a month into the New Year! January seems to have flown by. I feel like I've literally been flying everywhere. As you probably know, I returned to Slovenia on 1st January and after only 2 weeks, flew back to the UK for a conference. Some of you might remember that I went to a Women in Ministry conference run by the Proclamation Trust last year. Last time I went with the Australian missionary from my church but as that family returned to Australia in the summer, this year, I went by myself.

It was a great time of fellowship and teaching but also just feeling like I understood everything that was going on around me. We were looking at Old Testament Narrative, what we can learn from it and how we can teach it to the people we work with. I learnt that a massive 52% of the Bible is narrative but people often neglect teaching it as it is seen as more difficult than the gospels or the letters for example. If we ignore it, though, that's a huge part of the Bible that we are ignoring. I learnt a lot and really appreciated talking with many women who have much wisdom to impart. I was also able to catch up with people I had met last year and talk through how things have been going both for me and for them in the past year. It was a great time of refreshment and a reminder of how big and good our God is.

During my time in the UK I also appreciated having a few days with my parents. Although I had a good time with them at Christmas, it was nice to have a more relaxed time without worrying about getting a million things done.

I arrived back in Slovenia late on Monday night and it's taken a few days to feel like I've got back into the swing and routine of my life here. As much as I had a really good time in England, I'm grateful that I can now focus fully on my work without the disruption that travel brings. Unless an emergency happens, I'm not expecting to go back to the UK again until I move back at the end of August. I will be having visits from my sisters and my parents at different times over the next few months which will be a good break from my routine but I won't be the one needing to travel!

Once again I want to thank you all for your continued support and prayers. I appreciate every single one of you. Although I am still unable to reveal my plans for the future, I will need to raise financial support both for this next year and hopefully the future. If you feel like you would be able to support me in this way please take a look at my ECM worker page: https://www.ecmi.org/en/worker-detailpage/01441085-2cdb-4671-88d5-488b3c3c7ef1. Also if any of you would like to receive my bi-monthly prayer letter, please email me at s.re.deacon@gmail.com.
at January 31, 2020