Sometimes Lots of Things All Happen At Once... 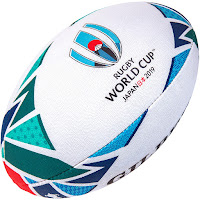 Today as I look out of my window, the sun is shining and it's a beautiful autumn day. We're well into the Rugby World Cup and at time of writing Wales is doing pretty well. I even tried to teach rugby to the youth last week. I'm not entirely sure how well it went down. They didn't seem to appreciate the whole passing backwards thing. At least I made the attempt and slowly I might be able to persuade them that it is a good game...

Last week was just one of those weeks, where everything seemed to happen at once. Firstly, it was the first week where I was really back to normal work. Everything has now started up again, which is great, and I now have a better idea of my workload and weekly rhythm. Yes I have more work than last year but I enjoy it all and I like to keep busy. Sadly not everything went smoothly. Last week I again attempted to join the language course. It seemed to be going well, the assessment was ok and then when I went to see if I had a class on the Thursday, hurray, I'd been assigned one. Unfortunately it was far too easy for me. I don't want to disparage other people or their learning but the range between me and some of the other people in the group was massive. The people themselves were lovely but it wasn't helpful for me to spend a lot of money just to make friends and not learn anything. I might have stayed to see if it got better but I had a frustrating conversation with the teacher after the class. I won't go into what was said but sufficed to say that it was that conversation that swayed me to leave. I'm not upset about it as I'm back again with my tutor and I know that I will continue to learn lots with her. I've also made the decision not to even bother applying for the course next semester. It would be my last semester and it's just not worth the hassle when I know I have a good teacher already.

This now leads me to the second big thing that happened last week. I finally got to experience the Slovene medical system. If you know me at all, you will know that I'm no stranger to doctors and hospitals due to the number of injuries I've had. What you may not realise is that I do have an underlying condition that is probably a major cause of many of these problems. Anyway, I've managed to injure myself again. It happened when I was in England at the end of August. I'm not entirely sure what happened but my hand/ thumb started being painful. I tried to shake it off, thought it wasn't a big deal, but if anything it has got worse over time not better. I eventually realised that I couldn't put it off any longer. I would have to go to the doctor. I am very grateful that I have private health insurance as it has made my life so much easier (I'm not eligible for Slovene health cover). I firstly had to find a doctor that spoke English. I was surprised that I was able to get an appointment that afternoon. I arrived, went to the reception and I was just sort of pointed in the direction of a waiting room. I had no idea what was going on. Everyone else seemed to know what to do but I was just sat there! Eventually I was able to speak to a nurse and she took my Slovene identification card. I then had to wait again and pray that my identification would be returned to me! In the end it was all ok but in those 45 minutes when I was waiting, I was incredibly stressed. The doctor wanted me to have an x-ray and an ultrasound on my hand but apparently it's up to me to organise that. I was able to get an x-ray quite easily and they even gave me a copy of the images as a souvenir! The ultrasound was more difficult and stressful. I ended up speaking to about 4 different clinics each sending me from person to person and department to department. Fortunately most of them spoke good English with the exception of a few people thinking I said 'son' instead of 'thumb'. At one point I was asked for my son's details... In the end I've got an appointment on Monday so the saga continues.

All in all, it's been a busy and stressful couple of weeks but I know that God is in control of it all and that he is upholding me through it all!
at October 11, 2019