The Return of the King - Snapshots from Camp...

The last two weeks have been incredibly busy for me. I may have forgotten to mention that I was preparing for a Spring camp with the teenagers from not only our church in Ljubljana but also other teenagers from across the country and from a church in Linz, Austria. In total we had 30 teenagers on the camp which was a real encouragement. We travelled to a castle near Linz which took 4 hours to drive from Ljubljana (those from Linz had a 20 minute train ride!) but it was well worth the journey. As the camp was international, it all took place in English although I still tried to practice my Slovene on occasions.

You may be admiring the camp booklet we were all issued with. This was the work of one of the teenage girls I meet up with regularly. A lot of people, both teenagers and leaders put in a lot of hard work to make this camp happen and praise God it all seemed to go well. The theme of the camp was The Return of the King, looking at the book of 2 Peter. We had talks on remembering the King's promises and return and also to watch out for false teachers.

I had a few responsibilities on camp, I was involved in the music, running a game and co-leading a workshop on drugs and alcohol (I had to do research for that one!). Unfortunately I managed to come down with a cold on Friday and so was struggling through the weekend with energy levels. Despite this, (apart from the music which had a few issues) the weekend was a success and all the teenagers I spoke to really enjoyed it. They were only sad that it was so short (we only had one full day).

The most important thing is that the gospel was taught and the teenagers were encouraged to grow in their relationship with God. Please be praying for these young people, for those who already know God, that they will be strengthened and will stand firm especially when they live in difficult countries to be Christians. Please also be praying for those who have not yet come to Christ. Thank God that they came on this weekend away and heard the gospel but pray that God would be working in their hearts and that they would turn to him. 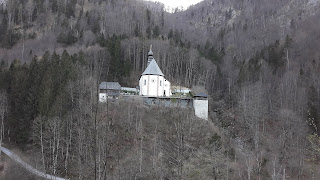 Ok so I know I skimmed over the fact that we were staying in a castle in the Austrian mountains. Unfortunately I don't have many photos as other people seemed to be taking a lot. I don't even have one of the castle itself. What I do have though is a picture of a small church on the opposite slope, just so you can get a small idea of what it was like. We were surrounded by mountains and trees and thankfully the weather also co-operated. The one downside of this castle (which has been converted into a Christian conference centre) was the number of stairs from top to bottom. Of course all the girls were in rooms at the top! To get to the meeting room there must have been about 5 staircases and then another 4 or 5 to get to the dining room and then a few more to get outside. It was good exercise but also exhausting!

This was the third camp that has been run between the two churches. A lot of work and preparation was done by the Australian missionaries but they will be returning to Australia in August.  Both churches are keen to continue the partnership and to enable the young people to spend time with other teenagers from different cultures. Please be praying that we will be able to continue with the camp in the years to come.
at April 12, 2019