I know it sounds scary right! I've got back to Slovenia safely after spending the last week in England. I was back to attend a conference run by the Proclamation Trust for women in ministry. The theme of the week was Teaching Apocalyptic Literature which was both daunting and immensely helpful. We were staying at the beautiful Hothorpe Hall in Leicestershire. To be perfectly honest I wasn't really looking forward to the conference, mainly because of the timing. I was a bit annoyed that I'd just got settled again into my routine in Slovenia after Christmas and then within a couple of weeks I was back on a plane! 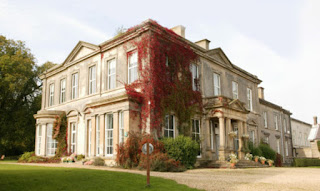 The conference was well worth it and I'm now hoping to be able to go to the next one. Now to the apocalyptic stuff. Before we went everyone had to prepare a talk on a passage. I was given Revelation 5 which for those who don't know is all about Jesus and how worthy he is. To be honest I think I got off quite lightly. As I was on the children's work stream, my talk also had to involve visual aids. This is where I am very thankful for technology and the ability to show a powerpoint presentation on a tablet. I'm not sure I would have been able to fit scrolls and lambs into my carry on...

I won't go into huge detail into what we learnt but it was challenging and thought provoking looking at passages from Revelation and Daniel. The overarching theme was to keep going, to endure because God has already won the victory. He has overcome Satan, sin and death. We don't need to worry about what is ahead because if we trust in him we know he keeps his promises of new life. We know that he has done all the work and we can rest in him and in his promises.

What was very interesting for me personally was being able to take a step back from my work here and actually think it through and evaluate. When I'm in the middle of a situation I tend to just deal with whatever is in front of me. It's not that I bury the hard stuff and don't acknowledge it, it just doesn't seem to affect me that much. Taking a step back and being able to talk things through with other people made me realise that actually I am in a difficult situation. Work in Slovenia is very slow and obviously it is draining living and working in a culture and language I'm not yet fluent with. It's ok to acknowledge that these things are hard. I think this is probably signalling the end of the honeymoon period here. I'm not homesick or feeling culture shock etc, I just think I'm in a better state of mind. I still love the work and life here, I know I'm where God wants me to be, doing what he wants but it's ok not to love every second of every day.

In the end, it's not about me and what I'm doing here. It's about God and his work. Yes it may be slow and difficult at times but whatever the situation we should keep going with God because he has already won the victory.
at January 28, 2019