Who Knew Bunk Bed Hammock Camping was a Thing...

This last week I've been camping with the church youth group on the summer camp. It was a really encouraging time with the young people. On the camp we had about 15 or 16 kids aged between 11 and 18. Most came from my church in Ljubljana but we had a few from a church in Maribor and still a couple of others from different parts of the country.

We travelled to the south east of Slovenia to stay at a campsite right next to the river Kolpa which forms part of the border between Slovenia and Croatia. On the map below, the blue dot is Ljubljana, where I live and the red pin is where we were staying.

I've been part of quite a few camps over the years but I was so impressed with the teenagers we had on this one. They all got involved, helped without complaining and joined in all the activities whether they were Bible based or helping clear up after meals. Naturally there were a couple of smaller groups formed but for the most part they all interacted with each other and the older ones often helped out with the younger ones. It was a real joy to see!

The theme of the camp was freedom. We focussed on the issues of freedom from parents and freedom from school but that real freedom comes from God alone. I was really encouraged by some of the conversations I had and that some of the teenagers said that they wanted to get back into reading their Bibles more. Please pray for these young people as they go back to their normal lives that they would want to continue to learn more about God and living for him. Please also pray for me that I would be an encouragement to those in the church in Ljubljana. I am really thankful that I have had this time to get to know them better!

My main role on the camp was the organisation of the music. I had to choose 5 songs that related to the theme, that I already knew, that were either already translated into Slovene or could be quickly and easily. It was an interesting task! I also had to choose a mixture of ones they already knew along with ones I could teach them. For those of you who are interested we sang: This Life I Live (Življenje ki ga jaz živim), Amazing Grace My Chains are Gone (Dar milosti prost sem verig), And Can It Be (Je vse to res), There's a Place Where the Streets Shine (Vem za kraj) and Great is He (Velik je). 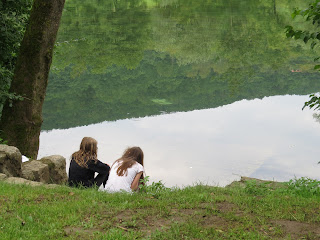 The hardest part for me was learning how to sing these songs in another language especially when I know them so well in English! I was really aware that my pronunciation could have been better in places but they were all really gracious with me especially when I was teaching them new songs. It was great hearing the kids singing these songs at random times during the day. It was also a great joy for me to have random singing sessions during the day. Some of the girls brought ukuleles with them and their own music so we occasionally sat down and just played and sang together. One of these times was Wednesday evening. Some of the teenagers were playing a game together when one of the girls came and sat nearby with her instrument. Whenever we were out in the game we would run over and sing together until the next game started and we all joined in again. It was a definite highlight of the camp for me. 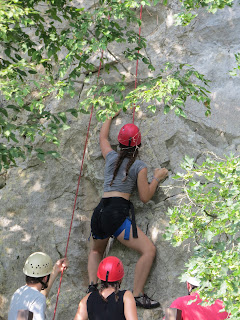 Much of the camp was also spent in outdoor activities. Being right next to the river inevitably led to lots of time spent in the water whether swimming or boating. It was a real relief to be able to cool down on some of the hot days. To be honest the teenagers would have been in the water whether it was hot or cold!

Another activity we were able to take part in was rock climbing. We crossed the border into Croatia to go to a Christian activity centre. The young people all seemed to really enjoy their time there and most of them gave it a go. They were split into 3 groups and took it in turns to climb the rock face. Once they had finished they were taken aside for a brief debrief. This was another encouraging time as it allowed them to talk about the things they had found hard. The group I sat in with managed to link it to freedom which was great. They talked about how it might feel like having more freedom if you climbed without ropes but in the end it was more dangerous and could lead to death. They were more free with the ropes as it allowed them to go further and have more security. This was then linked back to God and where our true freedom comes from!

I've been really encouraged by this camp and feel privileged that I was able to take part in it. That being said, despite working in a camping shop for 4 years, sleeping on the ground is not my favourite activity! One of the other leaders was sleeping in a hammock rather than in a tent and so I decided that on the final night, I too would sleep in my (own!) hammock. Unfortunately rain was forecast overnight... The other leader was prepared though, she had brought tarpaulin with her but there wasn't enough to cover both our hammocks separately. Cue the suggestion to sleep bunk bed style, which apparently is a thing. It was really comfortable! I slept in the top hammock and needed help to get in and out which did mean that I was somewhat trapped but I slept so well, well apart from the rainstorm at 3 in the morning which woke me up. I was dry, warm and comfortable... in a tree. Unfortunately the same couldn't be said for the tent I had been in. The rain somehow got in and soaked the feet and some of the belongings of the people in there. Who knew that sleeping in a tree would be drier than sleeping in a tent?
at July 27, 2018